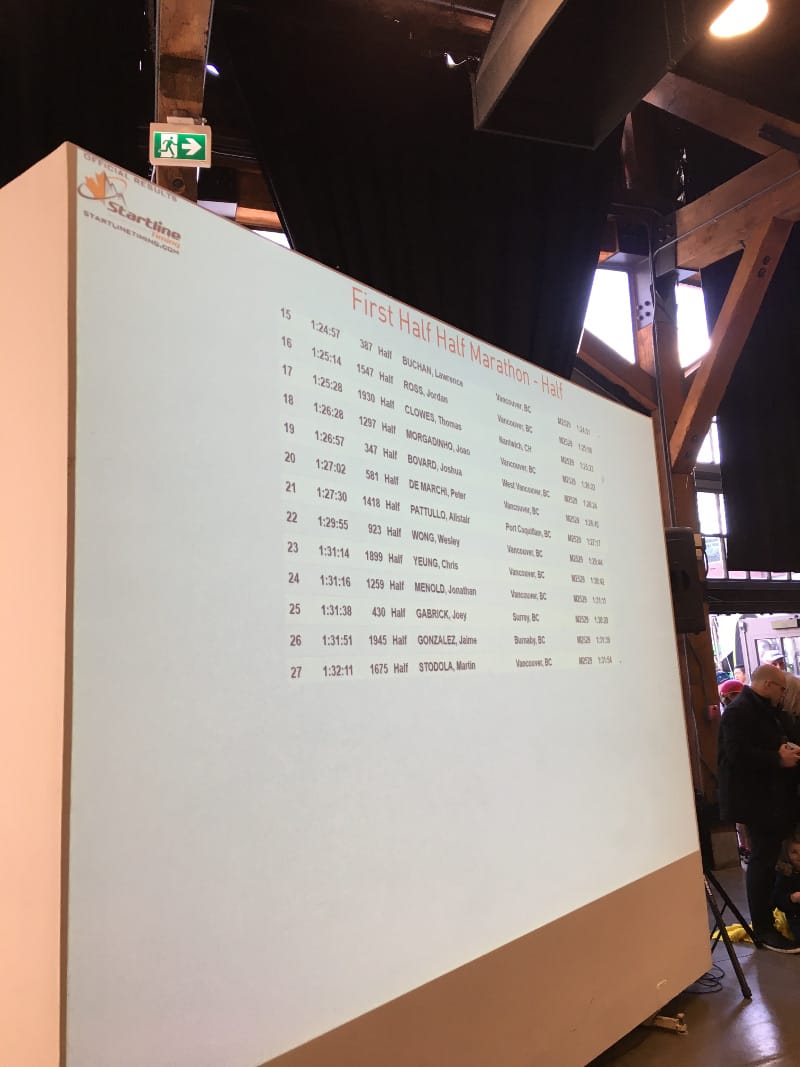 Since being in Vancouver I have been running with a club at Forerunners on 4th Street. Having run with them a few times I felt I was in similar shape to Walter and Darryl and lacking any other direction I decided to follow their pace and see how I felt.

They were looking to run around the 1:26 - 1:27 mark which was my PB territory. Having not raced in a long time and having had very on-off training cycles over the past year I was unsure if I was in PB shape. I also race a lot faster than I train (for some reason) so there is always a bit of guesswork involved.

I’ve been doing Hal Higdon’s Advanced Marathon 2 plan. This race lined up perfectly with the prescribed half marathon test race.

I am doing this plan because it is an ‘easy’ plan. I’ve done it before, and it is psychologically less strenuous than Pfitzinger plans.

The intention was to build a base with this plan, and then train ‘proper’ for Chicago or London with Pfitzinger. This time around however the plan seems to be doing some pretty magical things anyhow.

Only downside is that the speed work is a psychological ball ache. I think each runner has a lifetime capacity for fucking speed work. I reached it with my Berlin training and as such nothing excites me less.

Thus far I have been sucking it up and just doing it. I havn’t been paying too much attention to speeds and times. It’s more if I’ve been running up hills for the prescribed distance/time.. kinda fast.. and have not enjoyed it.. then I have probably done something useful..ish.

I joined the running club (mentioned above) for long runs. It’s real nice to have people to talk to and to take your mind off the miles. I was sceptical but 10/10 would recommend long runs with other people.

I was also tempted to do some speed sessions with the club. I tried a few and again 10/10 would recommend. They feel easy (or at least easier) when the numbers suggest that they are not. Requires some flexibility in what you are actually doing but has potential. I find myself in a weird situation though because I connect the feeling of despair with positive body adaptations. If speed work feels ‘easy’ is it doing anything? The other issue is that speed work is in the evening whereas I like to run first thing early morning and get shit done.

Pah. For Berlin I borderline had an eating disorder. I was 8kg lighter than I am now. I counted calories, watched everything I ate etc etc. Like speedwork it destroyed my soul.

Part of the reason my training went to shit in 2017 was because I like eating. I just gave up and started eating whatever the hell I wanted. I put on loads of weight and lost motivation to run because I was always bloated.

I have kinda resolved these issues. I just basically eat whatever the hell I want. I usually don’t do it in moderation either. I just vaguely pay attention to what I am eating. I don’t eat lots of sugary things (except chocolate - I eat all of the chocolate). I eat lots of protein (but not at the expense of carbs). I basically just do whatever. I train enough that whilst in relative terms I am ‘kinda fat’, I am not all over the shop mentally or physically and I get to enjoy nice things.

The fact I can write this is probably a positive thing in itself.

When I get a Cappuccino at Starbucks (every day) I ask for it skinny (which they almost certainly ignore). It makes me feel good. Then I eat a whole rotisserie chicken.

They say that each kg is 2-3 seconds per mile. It intrigues me that I am in good form at a relatively heavy weight. That said I am not intending to actively try and lose weight. I just really cant be arsed.

I followed Walter and Darryl. The first km (Sorry, I work in metric and imperial now) was 3:45. I told everyone we were going too fast, we laughed and didn’t talk again for the rest of the race :)

It still bemuses me how racing you fight for seconds. In the first miles Walter and Darryl were ever so slightly ahead of me. I sort of wanted to be right next to them but I had seemingly locked in a pace and wasn’t even going to make up those two metres.

At mile 4 I was next to Walter and he asked me how I was. I responded “Meh”. That summed it up fairly well. I didn’t think I could maintain 4 minute km for the whole race and I didn’t feel great.

Fortunately through experience I know that miles 1-4 always suck the most regardless of race distance. It’s as though after 4 miles your body just accepts “I guess we are doing this shit then”.

I kinda settled into a rhythm of sorts. It was upset somewhat by this guy who was (seemingly) intentionally zig zagging across the route to stop me passing. I like to give people the benefit of the doubt but he was being weirdly erratic. I was somewhat tempted to just run through him. Eventually I escaped.

At some point someone ran past and passed someone they obviously knew (coached?). “Head up, concentrate on your breathing, stay in the zone” he said as he dashed off. I used his advice.

Near enough to half way I was side by side with Walter. I just ran with him. Unspoken pace making. I was in no state for talking. At some point I peeled away.

At about mile 7 there was a man moving a giant tire. One of those ones you find on obstacle courses. It blocked the whole sea wall (the route). We had to pass in single file. It was really weird. I’m not sure if it was a prank.

I had a GU gel in my pocket. I have never used GU before. They don’t sell the gels I normally use in Canada so my choices were limited. I had tried to test a gel the previous week on my long run but it made me feel terrible afterwards. I had no further chance to test so I took a calculated gamble with the market leader. Mistake. GU is super stodgy. It’s like eating cake batter. The flavour is surprisingly good if you can breath long enough to appreciate it. I tried a little bit, nearly had a heart attack and then carried my open gel to the next water stop. Swallowed the rest down with water. Awful experience. 0/10 - do not recommend. Gels are a psychological tool more than anything for me. I am fairly confident that this Gel episode cost me time.

Not feeling too good I latched onto two guys who were pacing consistently. We had a triangle formation. I hid behind them (without them knowing). At this point it was just a case of getting through the miles. The slope up and out of Stanley park was annoying. Mile 11 seemed particularly long. I had a bit of a lul but managed to keep going.

The final mile was OK. Always has the benefit of just being a countdown. The final hill up to the finish line was worse than I had anticipated but at that point you are just getting the job done.

By the top of the hill the guy in front was quite a bit ahead. I wasn’t going to catch him. I had apparently made a gap between me and my unknowing pace makers. I knew this because when I passed the police started letting cars cross. I had no pressure from behind. Pointless sprint finish etc etc. Job done. 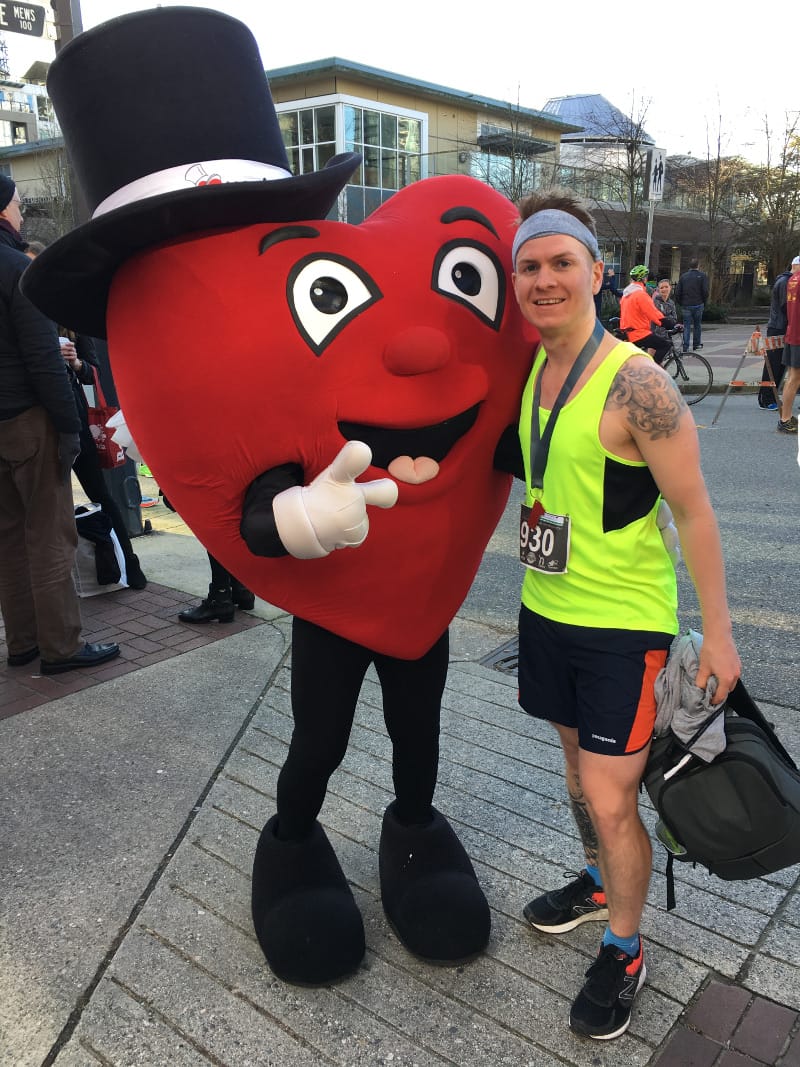 PB = awesome. I didn’t put down on paper or in public my “If I PB I move to Vancouver plan” because I only publicise plans I am confident about and I really had no clue if I was in PB form and I don’t want to tie myself into a mental obligation to move to Vancouver :P I still might, but its hella expensive.

At the start of the year I was throwing around Boston plans. My thought process was to run a 3:30 well trained. That in principle should be easy. Annoyingly (?) I am well enough trained that a sub-3 Boston seems feasible. I think I’d prefer it if it was super clear cut one way or the other.

Whilst I PB’d here I know I am not in Berlin form (yet?), and I know that Boston is a hard/interesting course. I will probably (almost certainly) try for a sub-3 (fml). 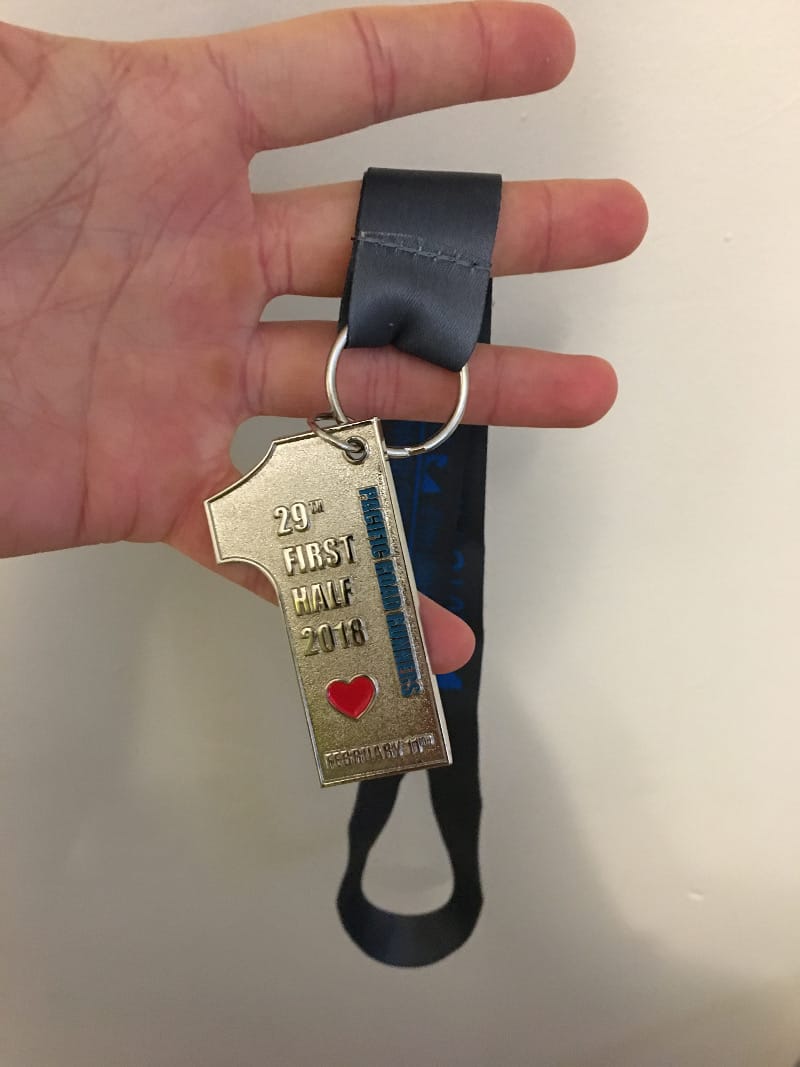