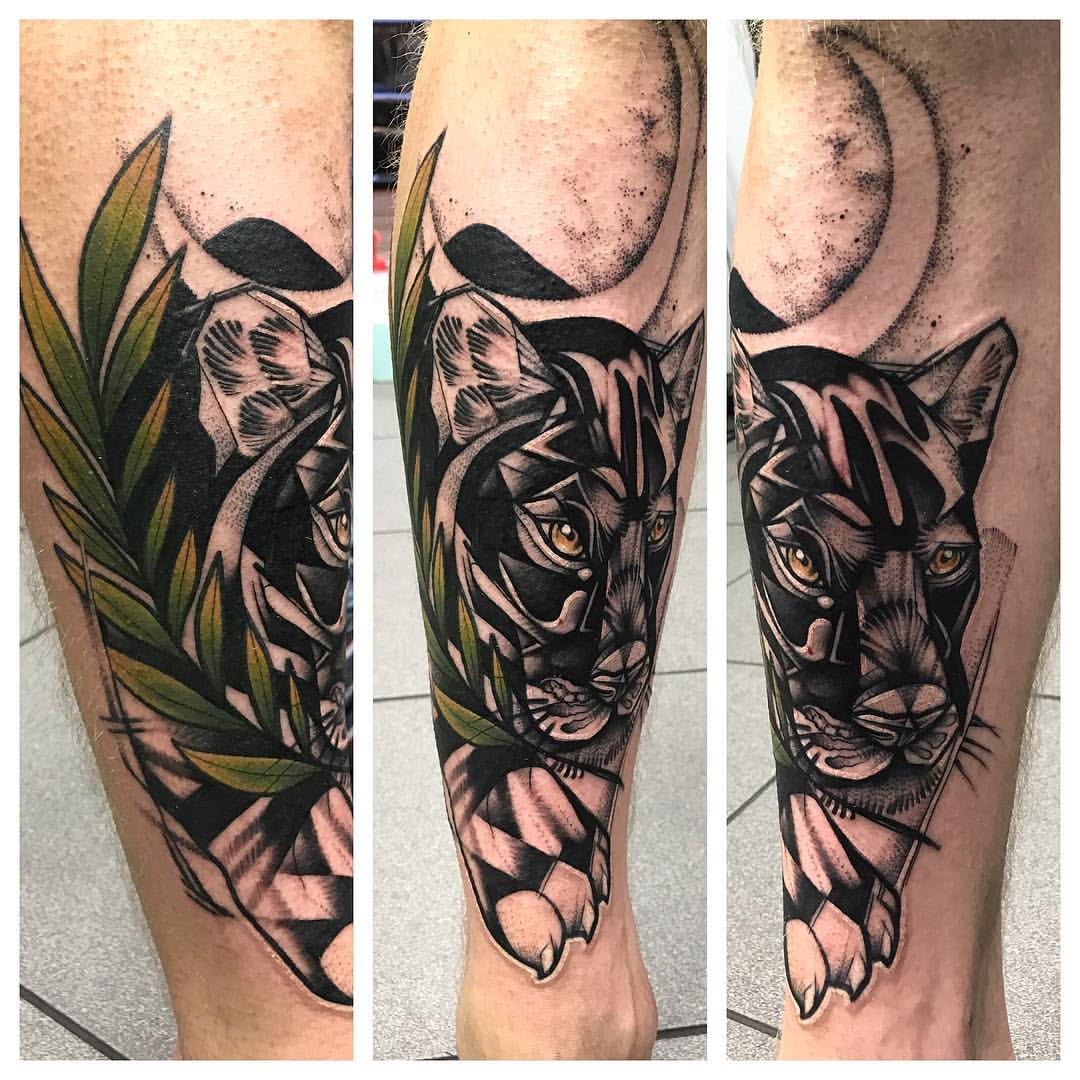 I really like tattoos. I have a few. Any tattoo owner has probably experienced the "What does it mean?" question.

My previous tattoos all have very personal meanings, and I have always been reluctant to explain the 'meaning' behind them. The reason being that someone else understanding and appreciating the reasoning behind my tattoos is somewhat irrelevant to me - the meaning behind them is important to me, and me alone.

The meaning behind my latest tattoo is a little more complicated and convoluted. I probably wouldn't answer the 'meaning question' simply because it would take too long. Instead I have written a blog post.

This is my latest tattoo:

It was done by the awesome Luke Richards at Black Craft Tattoo in Wakefield. He is in the process of setting up shop at Tooth and Tiger.

The basic premise of the design was meant to be based around my life philosophy - Dionysian-y, eternal recurrence-y, be your best, it is what it is, monster inside, Nietzchian - ness.

Initially I wanted a design which artistically displayed Nietzche's eternal recurrence concept - the suggestion that life recurs infinitely, repeating exactly as you experience it. If you wouldn't be prepared to re-live your life ad-infinitum, then you are doing something wrong. I am constantly trying to micro-analyse my life direction and adjust it such that I never find myself dissatisfied or complaining.

"Life swings like a pendulum backward and forward between pain and boredom."

Given Schopenhauer's influence on Nietzche, and the awesomeness of the quote I thought that a pendulum would be a good way of representing all of the above.

Another recurrence related philosophical story that is important to me is Camus' 'The Myth of Sisyphus' - the absurdist insight into the futility of life (but having a ball none the less).

This diverted my attention and made me consider a bigger more artistic piece of Sisyphus pushing a rock up a mountain.

I am not a fan of hyper realistic imagery in tattoos. Nor do I like text or humans. As such this idea didn't really develop too far..

Having all these thoughts jumping around it soon dawned on me that getting a tattoo of an 'instance' of a philosophical concept was pretty foolish - I needed something more general that represented concepts not implementations. In addition to that, lots of people have tattoos of pendulums and rock pushers. They are almost as generic as stars and butterflies.

During my thought process I kept on coming back to Dionysus (Bacchus) - the God of ritual madness.

Nietzsche mentions Dionysus in 'The Birth of Tragedy'. My interpretation and approach to Dionysian culture is the idea that life should be an insanely enjoyable drunken, ecstasy fueled adventure. The rat race, and the 9 - 5 job don't interest me in the slightest. Absurdist reality is that life is pointless and that you 'make' meaning. Given the available environment I want my 'meaning' to be awesome. I don't want to die at eighty and think 'I was kinda mediocre at various kinda dull things' .. 'Once I got promoted from minion to minion' etc

Money and targets do not maketh the man. I once had a great job, and money didn't make me a better person, nor did it make my life any better. Humans are inherently never satisfied - again, the reality is absurd.. you can reach for the stars but you'll still never be happy so why not take a step back and actually enjoy yourself.

Still not having any definitive ideas on what I wanted in my tattoo I fell back to an idea for a different tattoo that I have been developing for a long time - 'the monster inside'.

At some point in my life I realised that if I really wanted to do something, I could. Anything. I didn't know what allowed me to, but I was able to execute on things that no-one would expect that I could (in fact a lot of my successes were the result of ego fueled rages after people told me I couldn't do X or Y).

N.B. Nowadays I only do things for me. I am not ego fueled anymore - I have nothing to prove to anyone else.. only myself.

Ego, self, soul.. general psychology/philosophy crossovers get pretty complex and confusing. My view is the whole 'monster inside' concept. There is something inside of me that allows me to go up a level as/when required. It is like going Super Saiyan ;)

I had envisioned some sort of 'creature' exploding out of my chest in a tattoo design. I had intended to link it up with my shoulder piece.

There were other small concepts and ideas that I had always wanted to implement within a tattoo design:

Putting it all together

Having booked in with Luke (based on the quality of his work), it was now a case of finalising an idea based on all the above.

I ended up deciding to get a jaguar (the animal) on my shin (I've always wanted a more publicly visible tattoo.. and as a runner..).

I like my tattoos to be completely unique, and whilst as an idea it is not unique it was my intention that the implementation would be what made it unique. I personally don't like any tattoos that are too realistic - I wanted something more abstract.

So.. how does a jaguar relate to any of the above?

So there you have it. That is the meaning of my latest tattoo.

In total it took 7 hours - one sitting. Initially it was going to be smaller, and completely black and white. During the process it developed into being bigger, and having colour elements. As well as trusting yourself, sometimes you have to trust other people too. Luke executed super well.

It was by far and away the most painful tattoo that I have ever gotten, but I just sucked it up. The last thirty minutes was pretty awful when Luke had to go over various parts of my raw wounded leg with white highlighting. Character building right..

Here are some photos of it along the way.. 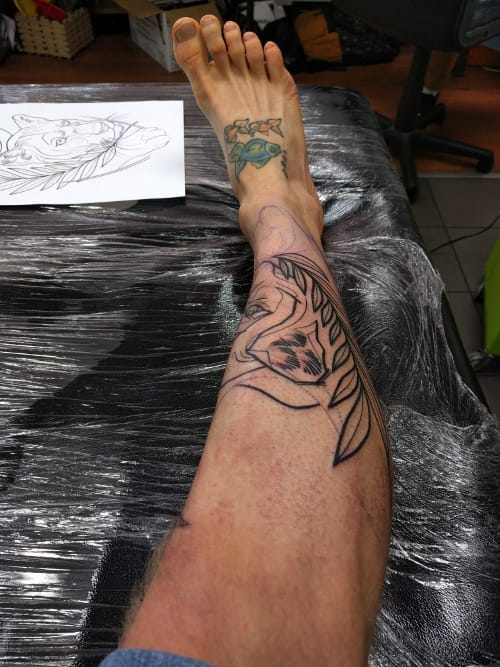 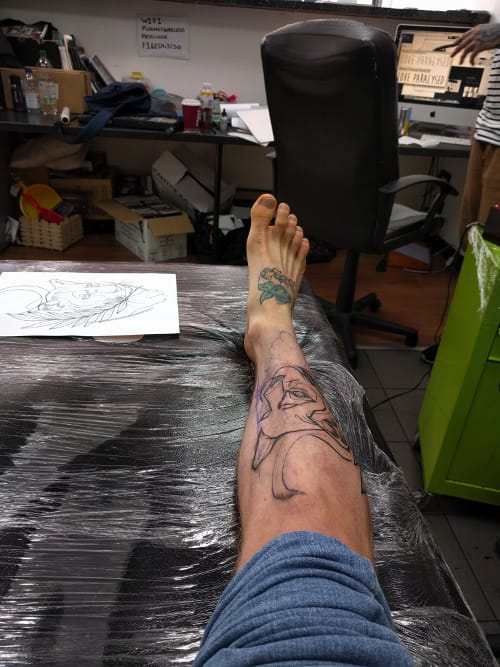 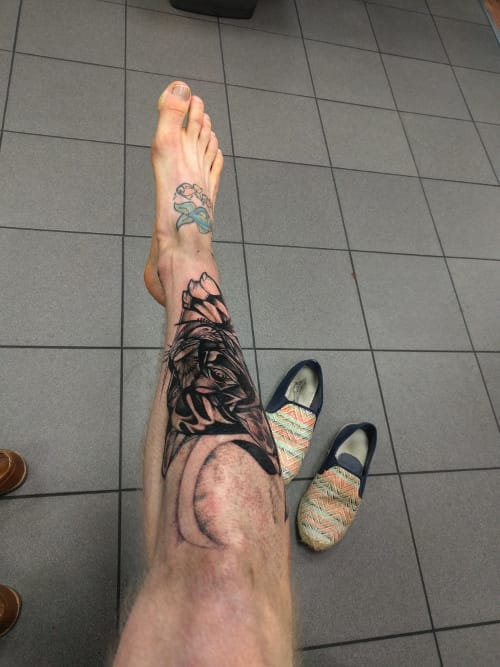