This is one of those blog posts that:

It essentially covers one way of approaching building a production ready product that is appropriately and easily tested across development and Beta builds.

In my case the product is Run 48 which is a mobile (iOS) app providing a series of tools for runners that integrates with a web application (found at run48.com) and its API.

As far as the web app goes, I need to be able to test that the web app works, and that what I am building works. I am not talking unit testing (although I do recommend that you have unit tests) but rather general integration testing.

I do not want to have an additional web based staging environment as:

So, I want two environments - Development (on my local machine), and Production.

In terms of the app, I want to have three 'versions' - Development, Beta, and Production (App Store). I do not want to maintain a second staging version of the API.

Being a running product that heavily relies on data from Strava we implement authentication using Strava's API. In principle we can just use one 'API account' for development and production. The app only reads from Strava so there are no data integrity issues. Regardless we will set up two 'API accounts' just for clarity/complete separation.

When developing on my mac I am hitting local files. They may have been modified, they may be buggy, they may outright not work. If I am testing user creation it needs to be in the Development database. I do not want to find some weird row with missing values that breaks API requests in my production database. Simple.

Somewhat hacky, but as a sole developer I can reliably do this. I use my macs machine name to discern if I am in a development environment.

In PHP you can do:

If I am, various configuration values are set accordingly. These include the database connection parameters. Essentially "If on Mac, connect to development database".

I can build the web app, play around and make sure things work on my mac whilst only manipulating data is a Development database.

In terms of the iOS app. I want the development build (the build that is run on my device when I simply click 'Run' in XCode to again only manipulate data in the Development database.

My initial approach (and that which I use) was to simply have it connect to the Production API (the only version of the API) passing a specific debug header (X-Run48-Debug) to indicate to utilise the Development database.

I use the awesome Alamofire library for networking, so adding this header to my requests was as simple as creating a custom request adapter as follows:

Discerning which build is being run is courtesy of this answer from StackOverflow.

In terms of the server implementation, the basic configuration outlined in the previous section is in fact a tiny bit more complex - it checks if the request is being executed on my mac OR if this header is present. If either is the case - Development database.

As the API is relatively static, this is 'acceptably risky' to me. I don't push out changes to the API unless they have been thoroughly unit tested and I can do basic integration tests in the simulator on my mac. After all I am building/testing the app not the API. The API should be assumed working.

For another, cooler, more interesting, and probably better way of approaching this read the 'PAC proxy' section below.

The iOS Beta and Production builds do not pass the debug header (obviously) when they connect to the API. As a result all data stuff uses the production database. Simple.

There are a few intricacies associated with using the Strava API. One of them is that you are only allowed one authorised redirect URL. My authorisation flow for the iOS app sends the user to the Strava app (if installed) and then redirects them somewhere (developer defined).

The Strava API only allows you to pass custom data in the 'state' parameter of your authorisation request. You can only pass a string of data. In principle you could encode multiple pieces of data in some way but it is not ideal or clear. I use this field to identify the app user who is authenticating through Strava.

To be able to discern on the server side if this is a debug request is not simple:

In this case I want to fall back to 'the other way the web app discerns if the request is dev' - the request coming from my mac - run48.mac.

As mentioned above, for clarity I have two Strava API apps for dev and production so I can simply use the appropriate Strava confirguration for the build type in the app and redirect the user to Run48.com or Run48.mac depending on the build.. right?

Sadly it is not so easy as Run48.mac is a host setup on my mac, not my iPhone. It means nothing to my iPhone. I begun investigating..

I wanted to create the equivalent of a hosts file on my phone to forward Run48.mac to my server running on my mac. I was aware that being on the same Wifi network I could connect to my localhost from my phone by simply entering my laptops IP (see here for overview) but I was not sure if it was possible to mess with hosts (or its equivalent).

I was aware from previous app builds that you could probably achieve what I wanted with a proxy app like Charles on the mac which would intercept requests and route them accordingly. This seemed a little too arduous.

I don't have a great understanding of proxying requests but the result of my investigation works and essentially involves telling your phone to look at your custom .pac file to discern how to route certain requests.

I found this article,  PAC file best practices and the wikipedia page extremely helpful for coming up with this super simple .pac file.

This basically says route requests to run48.mac to my laptops IP. Route all other requests normally.

Now you need to upload this to a publicly accessible webserver and do some basic config on your Wifi connection.

A how to on doing that is found here.

So now the Development build of my app (as far as Strava connections go) works like this:

Result = We have tested the development version of the Run 48 app and its connections with Strava whilst only touching our development database.

You may be thinking..

The eagle eyed may now be thinking why not use this approach for testing the development version of the app in its entirity. You could get rid of the need for a custom debug header. You are correct.

You could/probably should test the development API and its integration with the development app by using a custom proxy to route requests to the laptop local version of the API.

Why didn't I? Because I didn't realise I could until I needed to do it for the Strava integration. I likely will :) 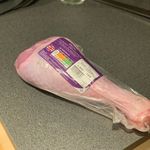 Would you like to buy a novelty Turkey drumstick? Yes

Things that Starling Bank should spend their £75 million investment on.. 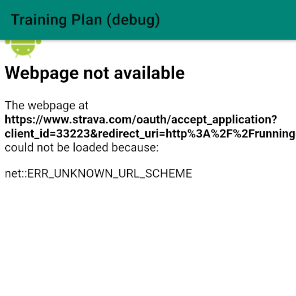