Failed it. Nailed it. 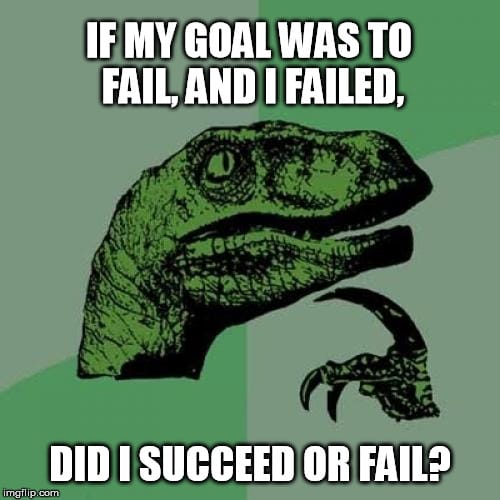 It seems like the done thing (at the end of the year) to comment on social media about how the previous year went.

I am going to start with the second version of this blog post. It is more positive, it is shorter, and gives a general overview of my 2016.

Some bad stuff happened (see Version 1 below), but I would not change anything.
I am pretty sure that nothing bad happened whereby the learning experience was not more valuable (long term) than the problem.

Takeaway wise. I think the most important things has to be my newly found appreciation of my own fallibility. I realised that I can be wrong, and that I can fail. That may sound egotistical in itself… but… well… I am really egotistical. Surely you knew that.

This is version 1 of this blog post. This is the more philosophical, ranty version of this.

It is longer… and I suspect some will find it offensive. How fun.

I noticed an unpublished post from a few months ago that I had preemptively entitled “How to lose a fuck tonne of money like a champion”. It contained some random babble like musings based on some reading I had done at the time (having weirdly… (you would never have guessed) lost a lot of money).

Given that that title in and of itself represents my 2016 quite well I figured that I would include those musings in this post.

Bad things that happened include (but are not limited to):

These posts remind me so so much of behavioural Economic concepts. Take loss aversion for example - “the tendency for people to strongly prefer avoiding losses than acquiring gains”.

People put way too much effort into how shit their year was. They think about all the negatives, and never look at the positives. Generally (in my personal opinion) most people are whiny, moany losers.

We can all compare notes about how awful our lives are… then we can complain about how shitty we feel (Positive Mental Attitude?). One thing that I noticed this year is that we live in a society of victims. Kinda pathetic.

But… really… if you relate to any of this, then you are a moron. Your life is not that bad. A lot of your problems are probably self inflicted. You should really find something better to do with your time.

If you spend an infinitesimally small moment of time really thinking about it, it becomes apparent that the fact I ate three boxes of chocolate on Christmas day is most definitely a first world, self inflicted problem. Even if it were not, I happily acknowledge that my problems are insignificant in the grand scheme.

Another thing… the fact that I initially wrote “the fact I ate three boxes of chocolate (as well as… insert list here)” made it apparent that I am oftentimes the aforementioned moron. Whilst true, it is almost as though I am putting extra effort into emphasising how bad things are for me. Who knows why.

For all of you with financial goals for 2017… consider reading get poor in a hurry.

For the pragmatist, I like this quote (from here):

To wax more philosophically, life on this planet comes with no guarantees. You may live to a ripe old age or get struck with an illness and die in your prime years. This uncertainty however, must not lead to paralysis. The uncertainty of the markets is just a projection of general uncertainty of life. It’s a part of the human condition.

If you are considering your personal investment portfolio… dont. If you ignore this advice:

And when you lose. Read this:

First I stop thinking about the loss, it’s done and letting that emotion cloud your thought process is going to do no good.

This is the bit where you despise me even more. If I appropriately analyse all the ‘bad’ things that happened this year, I can turn them into positives.

Financial losses. I have (as of yet) not made any financial loss. I lost myself in the concept of unrealised gains. On paper my investments were doing well. I did not sell them. They lost most of their gains.

The reasons that I invested have not changed. Had they continued to go up, would I have sold? Probably not. Human Psychology. I played a game that I was always going to lose.

Now that I know this, surely this will never happen again? wishful thinking

Lost domain name. I lost one of my companies really valuable domain names. I believe that it was not my fault, but the whole debacle could have been avoided had I done some small things.

In addition to this, politely conversing with the party in question allowed me to get the domain back at minimal cost (in the grand scheme). Historically I would have gone in all guns blazing. Turns out that I do learn. Blame games are lame (that is why the words rhyme).

Accounting. I paid an accountant lots of money. He was not a very good accountant. I hired him because he was a little cheaper than the alternatives. I was a fool. Lesson learned - don’t be a cheapskate.

Bonus. My corporate affairs are complex. After this fiasco I talked to a number of other accountants who said stuff that was completely wrong. I taught myself corporate accounting. I completed all my own accounts, and tax returns. I helped others do the same. I learned lots. It was fun (that is a lie).

Essentially, 2016 was good. Lets all be better people.

I am a 30 year old software engineer from the United Kingdom. During the day I build multi platform applications. In my spare time I eat food and run marathons. Sometimes I write angry tweets.